What will you get:

This means that you’ll get 2 to 3 times more users than the agreed 20k.

E.g., 1 user will join your Telegram chat/channel / Twitter and Facebook and you’ll get 4 subscribers total, however, it is only 1 unique airdrop user.

We can attract 20 000 airdrop users to your campaign. 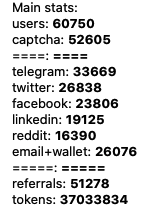 Though the ICO era has ended, the various tools that were used to establish and retain communities during that time are still relevant and may be used to assure the promotion of crypto ventures. The airdrop – the free release of tiny quantities of project tokens as rewards for specific acts that users had to carry out – was one of the most infectious and effective instruments throughout the ICO era.

Users were expected to follow projects on social media, enter their contact information, or execute certain acts to earn the desired amount of tokens. Users were willing to follow hundreds of projects, participate in bug hunts, create articles, or publish content in order to obtain a certain quantity of free airdrop tokens, which they could subsequently sell. Some users have even made a career out of becoming serial airdrop hunters, scouring the internet for new projects, and participating in their airdrop campaigns to amass tokens and sell them swiftly on exchanges.

Airdrops of cryptocurrency tokens have also been used for various purposes, such as boosting community participation or attracting new members as part of advertising or marketing initiatives. Such acts were beneficial to a degree, but they largely proved to be a waste of tokens, since most users with no motivation to stay or acquire tokens sold the tokens they received and moved on.

As a result, cryptocurrency airdrop campaigns must be carried out by specialists who are familiar with the industry and user mindsets, harnessing their motivation and ability for the project’s benefit.

What is Cryptocurrency Airdrop?

A crypto airdrop is all about the delivery of a limited number of tokens to users as a reward for completing a set of tasks related to the promotion of a project or community. An airdrop’s main goal is to draw attention to a project or to receive something from the community, such as contact information for future advertising or feedback on product or service functionality through bug hunts and other activities.

Before an airdrop can be undertaken, some factors must be considered. To begin with, airdrops are not free, as the purpose is to grab attention and keep users. As a result, projects who want to merely distribute their tokens for the sake of advertising and boosting the usability of their products or services will quickly see their tokens auctioned off on exchanges.

Airdrops should never be done after a project has been listed on an exchange since this will result in immediate selloffs of the airdropped tokens and deflation of demand for them.

Users must be given explicit instructions on how to get the airdropped tokens. Such a strategy will ensure that users follow the airdrop’s parameters and generate organic traffic that will convert into a set percentage of real users.

For the airdrop, specific chats and forums must be built so that users know where to get the necessary information and can be forwarded from the dedicated resource to the project’s website. This will help increase organic traffic to the site and generate interest in the project.

What We Can Offer?

Because of the many complexities involved, airdrop marketing initiatives must be managed by professionals. The key to success with airdrops is to work with a credible and competent crypto marketing business. Digimarkdirect.com provides a variety of services for projects looking to market their offerings through airdrops and other methods at a low cost. Digimarkdirect.com is a dependable partner when it comes to airdrop promotion services, with dozens of use cases and client testimonials dating back years.

An airdrop can be a great tool for promoting crypto projects and generating organic traffic. With airdrop campaigns, Digimarkdirect.com provides the resources needed to maximize the power of the offered promotional instrument and move projects up the traction ladder.